Great Britain’s Charlotte Dujardin and Valegro, reigning FEI World Cup™ Dressage Champions, wowed the crowd and the judges Thursday afternoon with their winning performance in the FEI Grand Prix competition at the 2015 Reem Acra FEI World Cup™ Dressage Final. Their superb test earned the pair a score of 85.414% to clinch the top spot, along with wild cheers and a standing ovation from the 7,344 spectators that filled the Thomas & Mack Center in Las Vegas. 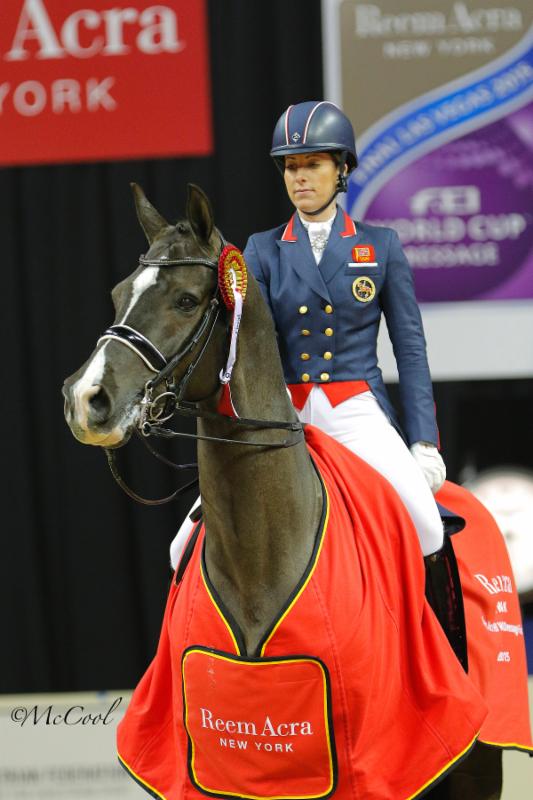 Dujardin and Valegro are the only duo in the history of the sport of dressage to hold Olympic, World, European and World Cup titles simultaneously, as well as all three world records. Twelfth to go in Grand Prix starting order, the pair kept their cool and executed their test like seasoned professionals, which earned them seventeen perfect-10’s for movements throughout their performance, and the number one position from all seven judges.

“I was really, really happy today,” said Dujardin. “He’s had a long trip to get here and for the past few days he hasn’t really felt like himself, so I was a little bit worried yesterday. Luckily today it hasn’t been so hot so he managed to cope better today.”

“I had a great ride,” continued the defending Champion. “I was really happy with the test. I think the first part took me a little bit to get into, but then the canter work felt really good. I enjoyed it and the crowd was great!”

Edward Gal of The Netherlands had a fantastic performance aboard his 2012 Olympic mount Glock’s Undercover N.O.P., scoring 79.057% to finish in second place. This is the pair’s third FEI World Cup™ Final together, and Gal is looking to reclaim the World Cup™ title he won in 2010 with the famed black stallion Totilas.
“I feel great and it was really good!” said Gal. “Glock’s Undercover felt a little bit tense at some parts, and I had some mistakes which was a pity, but still I was really pleased with him, especially after three days off after quarantine. He reacted really well with the audience so I was really happy.”

Steffen Peters of the U.S., who won the FEI World Cup™ Dressage title in 2009 when the Final was last held in the U.S., took third place with Legolas 92, the horse he competed at the 2014 Alltech FEI World Equestrian Games™ in Caen, France. Their test earned cheers and another standing ovation from the crowd, and Peters was obviously thrilled with their performance as he grinned from ear-to-ear, and even gave the air a ‘fist-pump’ after his final salute.

“It’s so exciting!” said Peters. “I can guarantee you that I’m probably even more excited than the two of them put together,” said Peters with a laugh referring to Gal and Dujardin. “First of all, I’m so proud of Legolas. It’s been a very long, difficult and challenging way to prepare for this and I’m so glad it worked out,” said the three-time Olympian who played an audio tape of crowd noises whenever he schooled Legolas at home during both morning and evening sessions to prepare him for the atmosphere at the Thomas & Mack Center.

The scores from the Grand Prix do not carry forward. As all the riders received scores above 60%, they will all move forward to compete in Saturday’s FEI Grand Prix Freestyle to Music competition, which will ultimately determine the Champion of the 2015 Reem Acra FEI World Cup™ Final.